Elizabeth Ramos is a violinist who specializes in classical and mariachi music. Formally trained in the Suzuki Method since the age of two, Ms. Ramos attended such prestigious music programs as the Interlochen Arts Academy, Tanglewood Festival, and Aspen Music Festival, before completing her bachelor’s degree in violin performance at the Cleveland Institute of Music.

Elizabeth has appeared in recitals and chamber music concerts in the United States and Mexico. She has performed extensively with the Missouri Symphony, Chamber Project St. Louis, the Kingsbury Ensemble, the Bach Society at Powell Symphony Hall, the Pittsburgh Ballet at the Fox Theater, and has twice premiered new pieces for chamber ensemble with the Sphinx Virtuosi Ensemble at Carnegie Hall. Solo performances with orchestra include concertos by Tchaikovsky, Wieniawski, Barber, and Lalo. Recently, Ms. Ramos performed with famed pop group The Black Eyed Peas, and with international pop icon Stevie Wonder. Elizabeth Ramos is a former faculty member of the Community Music School of Webster University, and East Central College in Union, MO. Ms. Ramos completed a master’s degree in violin performance with a Suzuki pedagogy emphasis at The Hartt School of Music in 2018, and holds ABD status in a Doctor of Music in Violin Performance at Florida State University. In the fall of 2020, Elizabeth joined the faculty of Greenville ISD Suzuki Strings outside of Dallas, Texas, where she currently resides.

Raised in a large Mexican family, Elizabeth played mariachi music as a teenager, in addition to traditional classical repertoire, and has played with several mariachi groups throughout the United States. 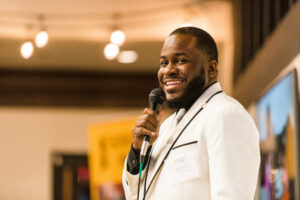 Kirk Johnson has been on a mission to provide the gift of music to lower income schools and children. As a musician, performer, and educator; Kirk believes that all children should have access to music education. Out of this belief, he founded SOUNDS Academy, a non-profit music education organization that teaches, mentors, and provides musical experiences and opportunities for underserved youth. SOUNDS Academy gives instruments to students that cannot afford one of their own. His unique approach teaches the character values of creativity, leadership, perseverance, resilience, and teamwork through music education. Students also learn to use their music as service opportunities by participating in performances at hospitals, shelters, or retirement homes. SOUNDS Academy works with over 30 organizations to bring musical opportunities to the schools and children in lower income areas.

He began his musical journey in Boston, Massachusetts with Project STEP. Through this program, he learned to play the violin and viola, took theory classes, and participated in chamber music and orchestral playing. While participating in the Preparatory School of New England Conservatory, he worked with conductors like Benjamin Zander and toured countries like Italy, Mexico, and Cuba.

Kirk graduated with a BM in Viola Performance and a MEd from Indiana University. It is here that he was introduced to the world of string pedagogy under the guidance of Mimi Zweig. Inspired by his experiences with Project STEP, New England Conservatory of Music, and The IU String Academy, Kirk founded Owen County S.O.U.N.D.S. (Students Opening Up New Doors with Strings) in the Fall of 2003. This program continues to educate the children of Owen County as a successful non-profit organization. After teaching music in public school and conducting youth orchestras, Kirk founded SOUNDS Academy in 2013.

In 2020, SOUNDS Academy has grown. We now have 300 students in our School and SOLO Programs. We expose an additional 4,000 students to live performances through our Musical Access Program and our Instrument Petting Zoos. There are now 10 teaching artists that contribute to the mission of SOUNDS Academy.

SOUNDS Academy has given over 35,000 lessons and classes to students in Arizona. Over 19,000 students have been exposed to musical performance or Instrument Petting Zoos through our Musical Access Program. We have given over $145,000 in scholarships for students to take lessons and classes so that they can learn how to play instruments. The greatest impact that we have made is in creating a pathway for students to go to college. 100% of the students who graduate from our SOLO Program now attend a college or university to pursue various degrees such as biology, business, and music education!

SOUNDS Academy has thrived by creating partnerships with over 40 local businesses, foundations, and organizations including The Arizona Commission on the Arts, The Arizona Community Foundation, Arizona Opera, The Armstrong Family Foundation, The Birthday Club, Phoenix Office of Arts & Culture, The Phoenix Symphony, Valley of the Sun United Way, Valley of the Sun Violins, and Virginia G Piper Charitable Trust.

As the Founder and Director of SOUNDS Academy, Kirk looks to remove any barriers that prevent children from gaining music education opportunities. Through this vision, Kirk has created an organization where children in lower income neighborhoods can embark upon a musical journey that will mentor them to and through college.